From Agile 101: The role of product owner

Are you sure you need a Clippy-like assistant on your app?

Many titles could be used for the person who acts as Project Director on the client’s side: the person with the product vision that the company needs, the one that represents the company in the work team. If that person belongs to the external organisation that has ordered the work, the title which fits best might be Product Owner, like in Scrum. That’s because that person literally owns it, is the “Owner” of what will be built. If this person belongs to our own organisation—someone who will represent the “client” in the project—the title normally used is Project Manager or even Business Analyst, depending on the company doing the hiring and naming. Personally, maybe because of the type of projects that I normally manage, I’m more comfortable using the title Project Director.

Whatever we decide to call these people, their contribution to a project is key to its success. They decide which features the project will have, which ones are indispensable and which ones are not. Maybe they will be the users of the final project, and thus will have a very clear idea of which elements would be key to create a useful tool that they use daily at work. However, its usefulness shouldn’t be limited to just themselves or their department, but rather it should also take into account the requirements of the whole company.

When we start a new project, the Project Director on the client’s side and the users of the final product have lots of ideas and great expectations about the new system. Sadly, no project, no matter how big it is, accommodate each and every suggestion from its users. Some ideas would be irrelevant for most users, other features might be too expensive to implement, or they would take so long to build that the project would be delayed for too long before being delivered. It’s here where the Project Director on the client’s side, who knows the market well and has a clear vision of the product, will have to prioritise the most important features and discard those that provide less value to the final product.

To explain how far-reaching the responsibilities of Project Directors are, let’s imagine the following. Our company decides to contract the development of a new airline ticketing system. In the company, they have decided that Elena will be the Product Owner or Project Director, and she will have to transmit to the chosen company all the requirements and needs that the new system must deal with.

Elena has a very clear vision of what she wants and is extremely enthusiastic about the project. So are the IT, marketing, and sales department heads, who have prepared an exhaustive list of features that the new product should include. Even in informal conversations, every day the future users of the system make new feature requests. Elena doesn’t want to miss anything important and conscientiously writes down all these requirements in a notebook.

Two months later, Elena realises that the team carrying out the work in the development company is delivering from 4 to 6 new features every week, and this seems to be their maximum capacity. She is happy with the work they are doing, but she has a problem: in her notebook she gets about 10 new feature requests every week. The list is growing and soon she will need a new notebook.

First of all, she asks the work team to double their efforts and deliver 10 features a week. Unfortunately, not many more features are delivered, and worse yet, she can tell that the quality of those features has gone down. On occasion, they even have to stop everything and correct previous deliveries. If things go on like this, frustration and stress will take over the project.

From now on, Elena must decide what should and shouldn’t be done. Not every feature will be included: at least not now. Some will have to wait for future versions. And of course, the idea of including a Clippy-style assistant to the purchase process for flight tickets will get a clear “NO.” 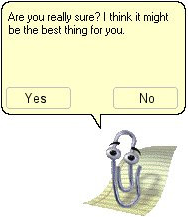 But, which features should she have developed first? Which criteria should she apply? Elena realises that there isn’t a direct relationship between feature cost and value added to the final project. Some features are easy to build, but some others take a very long time to develop while not actually providing a lot of value to the final product. If she asks the work team directly how many days each of those features would take, she will know what was the approximate cost would be. If she asks the users to score importance of each feature from 1 to 5, she will be able to calculate the value for her company.

If there are two features that have the same approximate cost, but one has value 1 and another one has value 3, they will clearly add the second one. If there are two features with approximately the same value for the company, but the first one would be ready in 5 days while the second one would be ready in a few hours, it’s also quite clear which one they should work on first.

Elena knows that the value and cost of each feature aren’t absolute values, but just approximations. We don’t know how much an apple weighs, but we know it’s about 5 times bigger than a strawberry and that people like the strawberry more (at least, the people who will pay for it like it more), so the strawberry would be built first. It’s an easy way to decide what provides more value, faster, to our project.

Communication is one of Elena’s main responsibilities. She must be in contact with the work team, but also with the people in her company who have something to say about the product that is being built. She has to be able to say “no” when necessary: she has to be practical in this sense, making this decision swiftly and directly. And also, she should know her business inside out, to make sure that everything that gets built will actually provide value to the company. I would say that Elena has quite a lot on her plate, don’t you think?